The Thousand Orcs, by R. A. Salvatore

Posted on October 31, 2012 by storytellersarchivist 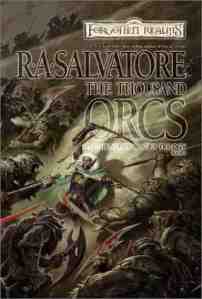 There are times when I so wish that things could be different, that tidy and acceptable endings could find every tale.
-Drizzt Do’Urden

Orcs get no respect.

It’s true.  While the Lord of the Rings movies may reverse that trend a bit, the fact is that ever since Tolkien, orcs have done the grunt work.  More than your average city guardsman, these guys are the cannon fodder; they exist for the sole purpose for heroes to carve through them like a hot knife through butter.  They rate slightly higher than goblins.  But King Obould Many-Arrows is looking to change that perception, at least in an indirect manner.  He’s an orc, and he’s got a desire to take back a former citadel of his, before a batch of dwarves came along and took it while he was busy with a rival band of orcs.  However, his ambitions are destined to put him along with his army against the most famous heroes of the North.  But why should he worry?  He’s got The Thousand Orcs.

The first thing to understand is:  if you’re looking to see Drizzt Do’Urden, famous drow ranger of the Forgotten Realms in a steel cage match against a thousand orcs, forget it.  In spite of what the inside cover and back cover say, this is not a solo Drizzt book.  Besides, if a scene like the one on the cover ever actually happened, our hero would be in serious trouble.  Plus, I figure he’d avoid direct confrontation, staying in shadows…!

Enough of that.  Time for the basics.  As of the close of the last book Salvatore wrote, Sea of Swords, Bruenor Battlehammer had gotten word that the King of Mithral Hall had finally died-which meant it was time for him to once again resume the throne (long story).  But Bruenor has it in his mind to have one last great adventure, rivaling the finding of Mithral Hall in the first place-an ancient stronghold known to the dwarves as Gauntlygrym.  Another motive to find it is the fact that the city of Mirabar is also looking for it, mostly because their mining business has been hurt by the work of the Mithral Hall dwarves.  In the process, however, they find themselves sidetracked by evidence of orc raids, aided by significantly larger allies.  And behind them in the shadows, a quartet of drow elves who are (amazingly) not interested in ruling the surface or hunting down Drizzt, but are instead rogues from their assorted cities.

Salvatore’s books over the last couple of years have been fairly solid stand-alones.  In other words, they weren’t so much a series in that sense of the word as much as they were about single stories.  While it was certainly helpful to have read previous books, it wasn’t highly required.  Well, with The Thousand Orcs, we’re beginning a trilogy; the first book means this is as good as it gets as far as backstory-the next two will probably not be as kind.  Salvatore’s going for more of an epic feel off of this trilogy, though, and the titles of the rest of the trilogy should give a foreboding feeling as to the tone those books will take.

Yet this one starts in a hopeful manner-for the first time in a long, long time, the Companions of the Hall are together again, adventuring together again.  Wulfgar, Cattie-brie, Regis-they’re all here.  And each of them have a fair amount of time giving the reader insight into their current characters-mostly during scenes in which it makes sense.  There’s a number of interesting subplots going on in the background too.  Even setting aside Obould’s plans and the drow rogues, there’s intrigue going on in Mirabar, where its ruler has crossed the line from being a rival to the dwarves of Mithral Hall to an outright enemy; this move has a chilling effect among some very important dwarves in Mirabar, threatening its peace.  Speaking of dwarves, a pair of dwarves known to readers of some of Salvatore’s earlier works are making their way to Mithral Hall themselves (and if you understand the significance of “doo-dad”, then you know who I mean!).  Salvatore also manages to work in some contemplations on the relationship between Cattie-brie and Drizzt, recognizing some very significant obstacles to it, as well as a greater appreciation for the nature of mortality.

The Thousand Orcs is a fairly action packed story, which I’ve come to expect from Salvatore; it keeps the reader turning pages until the rather chilling epilogue (which is all you’re getting from me until the next book is released).  It represents a turning point in the lives of the major characters, and foreshadows a danger to the entirety of the Spine of the World.  So don’t think of orcs as cannon fodder; think of them as the biggest danger Drizzt Do’Urden and his friends have ever faced.  Really.