Posted on December 14, 2012 by storytellersarchivist 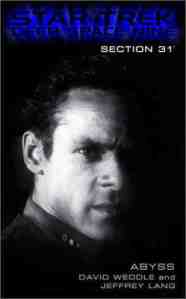 A word of advice.  Don’t try to be a hero.  Don’t think for a moment that you’re going to be able to find evidence you can use to expose Thirty-One.  Just go in, do the job, and come home.
-Commander Elias Vaughn, first officer of DS9

One of the more controversial things to hit Star Trek was the introduction of a shadowy organization called Section 31.  It wasn’t that it was another secret-police style organization-it was the fact that it was apparently sanctioned by Starfleet.  Section 31 was empowered to use any and all means necessary to insure the security of the Federation.  It came to light when it attempted to recruit the genetically-engineered chief medical officer of Deep Space Nine, Julian Bashir.  Bashir was outraged at this, and refused.  He has since dealt with the Section on two different occasions:  once when the section discredited a Romulan ally for one more tractable; and once when it was discovered that Section 31 created the plague that was killing all of the Founders of the Dominion at the height of the Dominion War.  Each time, the Section walked away unscathed (although Bashir’s contact man, Luther Sloan, did kill himself in an attempt to keep Bashir from discovering the cure for the plague-he failed in that, at least).

In spite of any controversy, though, the Section seems to have become a rather popular idea to work with; recently, Pocket Books released a set of four books, set in each of the televised shows, centering on the activities of Section 31.  I am not going to go into the first three here, although Trek fans may be interested to see how the Section fared with Kirk, Janeway, and Picard.  I will, however, go into Abyss.

Abyss takes place after the finale of Avatar.  The station is crippled, now lacking even a main power supply.  Luckily, the Ferengi Lieutenent Nog has a brilliant solution (which may seem obvious to folks familiar with the series; I missed it, though).  The repairs require a good portion of the population to leave, including nonessential personnel-such as Bashir and former-counselor Ezri Dax.  They plan to visit Earth, but that plan gets derailed before it even begins by a gentleman named Cole, a member of Section 31.  He wants Bashir to track down a rogue operative named Dr. Ethan Locken, who also happens to be genetically enhanced.  This visit kicks off the story.

Unsurprisingly, Abyss offers a look at Julian Bashir as the man apart; even among his friends, he had led a life of secrecy, since the Federation (Earth in particular) has a dim opinion of genetic enhancement (Khan Noonien Singh comes to mind-as I touch upon in another review).  The only others he’s dealt with who have been enhanced are a few sandwiches shy of a picnic.  Locken can be seen more as an equal; or a dark reflection.

While Bashir is certainly a major portion of this book, the rest of the cast is by no means neglected.  Ro Laren and the Jem’Hadar “observer” get a fair amount of time, and we get a pretty good look at how the observer feels about being sent to the Alpha Quadrant and DS9.  Kira deals with the aftermath of Avatar, both in her personal life and in a professional capacity.  The crew also discovers that Jake Sisko didn’t exactly go to Earth as advertised.

For the most part, I liked Abyss.  Bashir has been a favorite character of mine from the series even before he was revealed to have been enhanced; while he was irritating early in the series, the arrogance he portrayed faded and he became more likable.  On the other hand, there are some disturbing trends in this book:  Vaughn is getting annoying in that he seems to know lots more than he should, even as a commander in Starfleet for over half a century.  I hope this gets explained sometime, because I think the character has loads of potential.

As a final note, I have noticed some people mention on the ‘net that they didn’t like the fact that there were things that seemed to be happening outside the novel; that it isn’t fully self contained.  I, personally, enjoy this fact.  Of course, I like the New Frontier series as well for the same reason.  Abyss is just another episode of DS9; it picks up from a past “episode”, and lays the groundwork for the next one.  And fans of the movies, take note:  we get a little surprise from “Insurrection” in the book too, which makes perfect sense when you think about it.

I’m rather looking forward to the next book in this “series”, which (unfortunately) will be a part of yet another multiseries story.  But Abyss has helped insure that my interest remains intact.