Posted on September 1, 2012 by storytellersarchivist 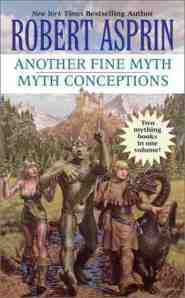 Who’s a clod?
Easy, kid.  Nothing personal.  Everyone who’s native to this dimension is a Klahd.  Klah…Klahds…get it?
Well, I don’t like the sound of it.
Relax, kid.  What’s in a name, anyway?
Then it doesn’t really matter to you if people call you a Pervect or Pervert?
Watch your mouth, kid.
-Skeeve of Klah and Aahz of Perv

This is a story about a fellow by the name of Skeeve.  Actually, a pair of stories:  this book was originally released as two different books, Another Fine Myth and Myth Conceptions.  These books-and the entire Myth series-took fantasy to a new level.  That level, of course, was littered with as many gags and jokes as one could figure.  It would be fair to say that the Myth books are what Robert Asprin is best known for.

The first book opens with Skeeve the apprentice, a young lad who is learning magic from Garkin the Wizard.  However, he wasn’t learning because he wanted to become great and powerful, but to get out of the icy cold of winter.  His real ambition is to use what he learns to become a thief.  Things get derailed a bit, though, when Garkin is assassinated while summoning a demon-leaving Skeeve to deal with the demon all lone.  Luckily for him, though, the demon is an old friend of Garkin’s, and is a little miffed that Garkin got himself killed (especially due to a rather mean-spirited practical joke).  The demon, Aahz (“No relation”, he remarks), deduces that one of his old enemies (and one of Garkin’s) is up to a plot to rule all the dimensions.  Due to certain inconveniences, Aahz agrees to take Skeeve on as an apprentice for his help on dealing with his current problems.

The second book takes place some time after Another Fine Myth ends, as Skeeve becomes more skilled with his magic.  Still under the apprenticeship of Aahz, he is “encouraged” to apply for a position at the Court of Possiltum, as Court Magician.  Of course, what the kingdom didn’t mention in its ads was the small matter that upon attaining the position, said magician would be expected to single handedly defeat the incredibly massive army that was on its way to conquer it!  And to make life more entertaining, the regular army wasn’t all that enthused about the cash being paid to said magician, when it could have gone to getting more soldiers and the like….

Unlike some of Asprin’s later works, where I felt he was getting a little too preachy, Another Fine Myth and Myth Conceptions were both great rides.  There are folks out there who read fantasy books and expect wizards to be mysterious and god-awfully powerful; well, this book demonstrates that powerful magic can be outmatched by raw cunning and treachery.  Skeeve consistently finds himself over his head (often thanks to Aahz), and manages to get out of them (only sometimes thanks to Aahz).  The reader, like Skeeve himself, gets a view of the magical profession that is somewhat less impressive than it has always looked!

One of the more amusing things about the Myth books are the jaunts to Deva, a merchants’ dimension where anything can be bought; but the downside is that every merchant there is a master scam artist.  Perhaps it might help to realize that the inhabitants are known as Deveels, which is often misinterpreted as a similar word also in certain markets…!  It’s in Deva, though, that Skeeve has the real misadventures, as it’s totally unlike his home dimension, and as a result, he gets into the most trouble here.

I enjoyed both stories in this book.  I’d have to give a slight edge to Myth Conceptions, as reading about Skeeve find a way to deal with a massive army was hilarious, and even more so when the origins of that army were revealed (it’s about as unexpected as anything I’d ever read).  But Another Fine Myth was great too; never before have lies and magic melded so neatly together to make something resembling Pervish food (don’t ask).  Best of all, these books are more accessible, I think, than Terry Pratchett’s books; these aren’t as deep a read as the Discworld books, but it makes up for it in throwing humorous situations in large quantities at the reader-and most of them will hit your funnybone.  I highly recommend this book.

(2012 note:  Robert Asprin passed away long after this review was written.  His Myth Adventures series-particularly the earlier ones-remain worth looking out for.)