Talon of the Silver Hawk, by Raymond E. Feist

Posted on August 22, 2012 by storytellersarchivist 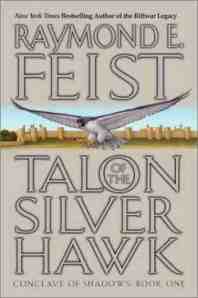 I don’t know.  There’s a man…a magician.  He and my father crossed paths before, years ago.  We have reports that he might be back.  We thought him dead, but perhaps we were wrong….  From what I’ve been told, this man is harder to kill than a cockroach.
What is his name?
He’s used several, so I doubt he’ll be using any that we know.
What does he look like?
His appearance changes.
A man who may look like anyone with a name no one knows.  I’ll be certain to keep an eye out for him, Caleb.
-Talon of the Silver Hawk and Caleb

The world of Midkemia is one I haven’t visited for a while.  In part, it has much to do with the fact that I pretty much skipped the Krondor books; and it’s been a while since I’ve read the group of books prior (the Serpentwar, if I recall correctly).  But, with a new set of books coming out, I figured on heading back.  Fortunately for readers new to Feist’s books, you really don’t need prior knowledge of previous books (although, as always, it helps), because it’s been a significant number of years since the Serpentwar, so most of the characters are brand spanking new (with a few virtually immortal exceptions).  So I picked up Talon of the Silver Hawk, and I’ve got mixed feelings about it.

It begins with a solitary ritual, one in which the boy Kieli of the Orosini will set aside his boyhood name and take on a name given to him by the gods.  Unfortunately, while he’s busy discovering his name (three guesses!), an army attacks his people-and promptly slaughters the lot of them.  That sad list nearly includes the newly named Talon as well; a pair of travelers saves his life-a life which will undergo changes like none any of his people could have imagined.  While he vows to find out who has sent this army to murder everyone he has ever known, he is also in debt to Caleb and Robert, who decide that Talon could be very useful to them in a battle that has been fought in the shadows against an encroaching evil-a battle which may never have an end.

Talon of the Silver Hawk isn’t so much about this war as it is about the boy’s training as he enters into manhood and into the mysterious Conclave of Shadows; this organization consists of spies, killers, and magicians, and they work to operate in secrecy-even though some of the members, such as the magician Magnus, has caught the attention of their enemies.  As Talon learns more about the men who saved his life, and their associates, he also gets bits and pieces about just who was behind the deaths of the Orosini.  But he’s not in a position to take vengeance upon the individuals involved just quite yet-but he will get a chance to make a good start.

One of the key points about the Conclave of Shadows is that these nominally good folks (and this has varying degrees), in order to advance a good cause, often find themselves doing evil things.  This gets illustrated to Talon in a couple of ways, which has an effect on him.  One has to wonder a bit about the motives of a group that sees a young man such as Talon as nothing more than a weapon to point and shoot at a target (not just Talon, either).  It’s even more disturbing when you look at two of the more prominent members of the Conclave, who have in the past been fairly upright individuals.

The book is mostly self-contained, leaving few loose ends (but significant ones for the next books).  On the other hand, it still had the feel of setting the stage for the later books.  I’m not too sure how many books are planned for this series, but Talon of the Silver Hawk makes for at least a respectable start-at least enough for me to keep reading.