Posted on October 18, 2012 by storytellersarchivist 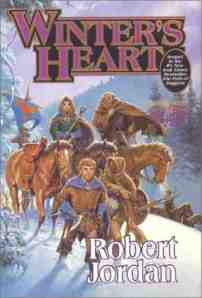 I’m going to cleanse the male half of the Source.
-Rand al’Thor, the Dragon Reborn

Anyone who thinks I’ve spoiled anything in that quote, no fear-it comes in this book’s prologue.

A word of warning-unlike most of my reviews, I am not going to summarize the books prior to this one.  There’s just too much going on in this series.  Suffice it to say, Rand al’Thor is the Dragon Reborn, who is said to be the man who will fight the Last Battle of this Age of the Wheel of Time against the Dark One.  If you haven’t read the previous eight books, don’t read this book-read the first eight first.  Believe me, this is not a book that stands alone well.

On the other hand…if you’ve followed the story of Rand, Mat, Perrin, Egwene, Elayne and everyone else-you probably know most of what’ll be going on in this book.  Winter’s Heart inches closer to Tarmon Gaidon, the Last Battle.  You would think that we’d have made more progress in nine books.

(I’m not bitter.  Really.  I’ll save the rant for the end of the review)

This book has a number of plots rolling.  The main ones involve Elayne, Daughter-Heir of Andor, trying to keep her nation from splintering off into civil war; Rand’s quest to cleanse the male half of the True Source (Jordan’s version of magic) of the Dark One’s taint-which causes all men who use it to eventually go insane; and most amusingly of all, Mat’s inevitable meeting with the Daughter of the Nine Moons, whom he is destined to marry (a fate which he’s not exactly fond of).  There’s a number of side plots as well, involving the kidnapping of Perrin’s wife (and her maid, the mother of Elayne in disguise), and the attempts of Cadsuane, one of the Aes Sedai, who is trying desperately to catch up to Rand, fearing that he’s losing his grip on his very humanity.

In some of Jordan’s previous books in this series, I’ve felt that nothing really happened.  It was a pleasant surprise to see that we’re actually getting some resolutions in this book.  Mat’s been MIA for the previous two books, and it was good to see that his fate has finally caught up to him (in part, at least).  Rand’s quest to cleanse the True Source with a pair of the most powerful magical focuses in the world is certainly something would expect he’d eventually try-as he rightly points out, it isn’t much good to recruit men who could use the Source if they all went insane before the Last Battle.  And Rand’s love life finally comes together in a rather odd, but not wholly unexpected manner.  For once, I feel that things have happened that make a difference.  But this leads up to my biggest pet peeve with this series.

<Rant On>
Jordan continues to drag this story out.  It’s been almost ten books!  I realize that the Last Battle is not something you rush, but a good story does eventually end.  I don’t know how much longer this series is to run, since I haven’t kept up with the newsgroups on this, but it’s obvious that it won’t end on book 10, and I’m not certain it’ll be over by book 12.  The fact is, each time a new book comes out, I’m having to re-read over a half dozen books; and as longtime Jordan fans know, these are not small books, in both quantity and quality.  While I’ll be sorry when the story finally reaches a conclusion, I’ll be glad to see that Jordan’s ready to move on.  Until then, though, each book is going to be filled with anticipation and frustration.
<Rant Off>

I’ll concede that this is a pretty good book.  I’m not as rabid a Jordan fan as some of the folks out on the net, I was happy to see progress made in some subplots, and new subplots beginning to unfold.  All things considered, I have to say that this is probably one of better books to date from Jordan.  If you follow the Wheel of Time books, then pick up Winter’s Heart.  It advances the story quite nicely.

And a warning to new readers.  I’m deadly serious:  go ahead, and read this series.  It’s complex, but so’s real life.  It’s easy to lose track of characters, because there’s so many of them.  If you’ve got the attention span, you’ll enjoy the series.  If your short-term attention span or the long-term has trouble…you might be better with lighter fare.  Jordan’s books can be a little rich.

(2012 note:  in case it isn’t obvious, this was written when Robert Jordan was still living; the series itself should conclude next year.)