The Sandman: Book of Dreams, edited by Neil Gaiman and Ed Kramer

Posted on March 12, 2013 by storytellersarchivist 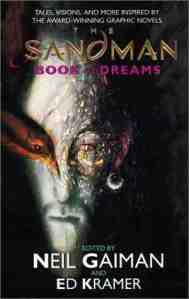 In the Beginning, all things had a Destiny.  Because they had a destiny, they would also be forced to accept Death.  In order to push away that dread certainty, we make creations out of Dream.  All things that are created, though, eventually face Destruction.  Destruction brings about Despair, and we Desire to recapture them.  In doing so, we experience Delight (or Delirium, depending on circumstance).  In my own clumsy way, I’ve described beings that existed before the gods, which will continue to do so until even gods die.  They are the Endless.

Neil Gaiman wrote a comic book series some years back called The Sandman.  It was a comic geared towards older readers, because the subject matter was most definitely not for immature minds-it had elements of serious horror, and all kinds of other disturbing things.  But it was also filled with Big Ideas.  The centerpiece of it all was the being known as Dream (aka Morpheus, the Shaper, the Prince of Stories, etc.).  While Dream was not always a main character in this set of comic books, he was always involved in some way.  One of the things I was firmly convinced of was that The Sandman would do well translated into novelized form.

Whaddya know?  Not a work of Gaiman, but perhaps the next best thing-a collection of short stories written by luminaries such as Gene Wolfe, Tad Williams, and Barbara Hambly.  Each story about the Prince of Stories, or at least situations and characters that had populated the comic book.  While knowledge of that comic would certainly be helpful, it didn’t strike me as being absolutely necessary; even the stories that are mixed deeply with the comic book’s events stand pretty well on their own.

Many of the stories in here are excellent.  I’d like to point out especially “Stronger than Desire” by Lisa Goldstein, where a mortal man has a very interesting wager with one of the Endless; “Each Damp Thing” by Barbara Hambly, where one of Dream’s servants, Cain, is forced to ‘fess up to taking something that he really, really shouldn’t have while Dream was away; “Valosaga and Elet” by Steven Brust, where a pair of Endless are cast in the roles of adversaries (and they’re not the ones you’d expect!); and “The Mender of Broken Dreams” by Nancy A. Collins, in which the Mender tries to understand his own origins, and Dream shows him just who is capable of such things.

My two favorites are about as different as can be; “The Gate of Gold” by Mark Kreighbaum, where a child’s doll attempts to find out why Dream afflicts little children with nightmares; and “Splatter” by Will Shetterly, in which an author finds himself unexpectedly attending the famed “Serial Killers Convention” in one of the comic story arcs.  Wonder what that says about me…?  (Heh.)

While some of the stories were not as good in my opinion, I recognize they’ll fit other readers’ tastes.  Even so, the bulk of the stories are more than good enough for me to give it a strong recommendation.  And if you find that you really, really like this book, you might consider reading the collected Sandman trade paperbacks; sure, they’re comics, but they’re at least as good as some of the fantasy novels out there-and like as not, better than most.  So go pick up The Sandman:  Book of Dreams.  It’s a great read.