Posted on January 25, 2013 by storytellersarchivist

The two men who led the expedition across the North American continent on Earth, Merriwether Lewis and William Clark, were sent on a mission to explore an expanse of unknown wilderness, to chart the lands they traveled, to seek out what new life there might be, to befriend the peoples they might encounter, to keep a record of their journey, and to bring that knowledge home.  They called themselves the Corps of Discovery.  Let us therefore, on this stardate, rededicate ourselves to that ideal.
-Commander Elias Vaughn, to the crew of the U.S.S. Defiant

In the beginning days of Deep Space Nine, Commander Benjamin Sisko was given two major tasks; he was to do everything possible to get the planet Bajor ready to join the Federation, and he was to explore the wormhole he discovered for Bajor-or more exactly, the space beyond the wormhole, in the Gamma Quadrant.  Unfortunately, the Dominion War derailed both missions, and was forgotten in the following episodes.

But beginning with Twilight, the Mission Gamma storyline brings both of those goals back into the full picture.  While the first third of the book is setup, the rest of the book goes in two different directions.  On the one hand, the Starfleet personnel (Nog, Shar, Vaughn, Dax, Tenmei, and Bashir) are off on a three-month mission to explore new areas in the Gamma Quadrant, now that the Dominion has chosen to (for now) isolate itself to ponder Odo’s experiences.  Then the other hand features the Bajoran front, with Kira, Ro, Quark, and some others as some very influential people in the Federation stop at DS9 for a semi-secret summit, discussing renewing Bajor’s petition to join the Federation.

First, though, the book wraps up some rather loose ends from the Gateways event; primarily the refugees from Europa Nova and the rather ticked-off Jarada who were really hoping for a benefit from the deal Vaughn had made with them.  Then the book goes off into the preparations being made for the Defiant’s flight through the wormhole, and for the arrival of some unexpected guests.  It’s not far into the mission, though, when the crew of the Defiant are called upon to save a world.

To be honest, the basic plot is kind of stock material; what sets the book apart (and a hallmark of the series to date) is the actions of the characters in it.  In the opening third of the book alone, we get:  more revelations of the troubled relationship between Vaughn and Tenmei; more Taran’atar and his attempts to understand this very different environment; lots more on Shar’s, er, romantic life, the intro of another Starfleet admiral, L. J. Akaar (points to people who figure out just who exactly he is right away; it wasn’t until waaay into the book where I finally remembered), and more!

Things get really moving once the mission is underway.  As I said, I found the Defiant segments kind of “the usual”, although it continued to advance the plots of both Vaughn and Dax (who’s taken quite well to her second-in-command duties).  The Bajor front is what really kept my interest, though.  Kira’s a bit on the defensive, still feeling the emotional impact of her Attainder, not sure if the First Minister Shakaar’s playing straight with her, and dealing with suspicious questioning from Admiral Akaar.  Quark and Ro’s relationship continues, as both come to realize that if Bajor is indeed accepted into the Federation, their lives will be turned upside down; Quark also has a new foil of sorts, as the Orion woman Treir proves to be as cunning as he is in running his bar.  Actually, the truth is that Quark undergoes a number of self-revelations in this book, which I’m looking forward to seeing continue.

The continuing subplots of Deep Space Nine continue to make appearances; another mention of the search for Jake Sisko shows that he has not been forgotten; we discover a secondary mission of Taran’atar that makes perfect sense considering who sent him; Kasidy’s pregnancy proceeds as most do, although she gets hints that the Bajoran religion is about to have a little turmoil.  While these don’t get much page time, they do continue to indicate the ongoing plot of the series, which is something that the television show did fairly well.

While there was a couple things that continue to annoy me (does Vaughn absolutely have to be on a first name basis with every single major player in Starfleet history?), there was far more that pleased me.  While Mission Gamma itself hasn’t drawn me in as of yet, the continuing story of Bajor (and a shocking event at the end of this book) made this book more than worth the time to read…and made me want to read the next one that much more.

(2013 note:  obviously, this book has NO relation to a somewhat more notable work called “Twilight”.)

Serpent Among the Ruins, by David R. George III

Posted on September 1, 2012 by storytellersarchivist 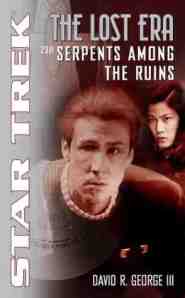 If we fight now, it will cost Koltaari lives.
It’s already cost that.  Hundreds of them, maybe thousands, in the two explosions.
Yes.  But the Romulans are pushing us.  They either believe that war is inevitable, and they should therefore gain as much advantage as possible, or they believe that they’ve already gained some advantage that will assure them victory.  Either way, they’re pushing us, inviting us to commit.  And we’re not ready.
-Lt. Commander Xintal Linojj and Captain John Harriman of the U. S. S.  Enterprise-B

Starfleet’s flagship has always been captained by the best that the organization has to offer.  Pike.  Garrett.  Kirk.  Picard.  In television and movies, we’ve seen all these captains of the Enterprise, but there is one captain about whom little is known-and the only time he’s appeared on screen has not reflected well on him.  He is Captain John Harriman, captain of the U.S.S. Enterprise NCC1701-B.  For those who may have forgotten, Harriman was best known in the movie Generations for lines that were along the lines of “It’ll be in on Tuesday”.  Harriman left one with the impression that Starfleet was scraping the bottom of the barrel when looking for a new captain to follow Kirk’s legacy.

But apparently, time has improved matters.  It is eighteen years after the disastrous maiden voyage of Enterprise-B.  John Harriman is still in command; his first officer is Demora Sulu, daughter of the most famous helmsmen in Starfleet history.  And in Serpents Among The Ruins, the Enterprise is about to be in the middle of an event that Captain Picard and company would later know as “the Tomed Incident”.  This book firmly establishes Harriman as one of the most canny captains to command a starship, and equal to Kird, Picard, Garrett and Pike.  At this point, I’d like to mention that this is a stand-alone book, but a part of a group of novels that encompasses “The Lost Era” of time between the days of Captain James T. Kirk and the time of Captain Jean-Luc Picard.

Relations with the Romulan Star Empire are reaching low ebb.  The Federation is also having a bit of tension with the Klingon Empire as well, even though it is still in the hands of Chancellor Azetbur.  So perhaps it wasn’t the best time for Starfleet to go testing a new starship named Universe, a ship that-in theory-will take the next step above warp drive.  However, a terrible accident inflames paranoia among the Klingons and the Romulans-both of whom believe (thanks to the joys of diplomacy) that the Federation is testing subspace weapons.  And stuck in the middle of all the fun is John Harriman and the starship Enterprise.  But while it seems that war is inevitable, it seems that there might be a few aces up the sleeve….

First of all, let me toss in my own two cents:  I thought Harriman had a raw deal in the movie Star Trek Generations; I had a hard time believing that Starfleet had a habit of promoting mental defectives (optimism springs eternal; I should’ve remembered Styles) to command of a starship.  That said, I thought that Peter David did a terrific job in rehabilitating the character in The Captain’s Daughter, and in a short story in The Enterprise Logs.  That rehabilitation is clearly evident here, as George acknowledges David’s contributions to the character both in his acknowledgements and-even more importantly-in the story itself; indeed, between Harriman’s troubled relationship with his father and a reference to the events in The Captain’s Daughter, as well as Harriman’s general attitude, I felt that George took what David had established and ran with it full speed.  And let’s face it:  if Harriman is still in command after eighteen years, than he must have had a career that easily matched Jim Kirk’s!

There’s something for fans of just about all the shows that have come forth for Star Trek.  Harriman’s legacy, after all, is built on the Original Series, as well as the heritage of Demora Sulu.  The Tomed Incident was mentioned as an explanation of sorts as to what kept the Romulans out of sight until they came back with the really BIG Warbird in the Next Generation.  For DS9…well, it only kind of counts:  because the link here is a young Lieutenant Elias Vaughn, already working with the special ops of Starfleet.  And it might not be surprising to hear that someone in the Paris family plays a part, indirect though it may be.

The plot itself also covers some nice territory, such as why Starfleet didn’t used cloaked ships until Defiant came along in DS9, what put the Romulans behind their own borders until the Next Generation, and just why subspace weapons were banned (the hard way).  It also confirms that Harriman has to be one of the most devious captains to command the Enterprise, and I include Kirk and Picard in that list!  Harriman also gets to show a bit more of his life outside of captaining with a romantic interest that doesn’t fall under the “romantic subplot of the week” category; and wel also get a brief glimpse into Harriman’s early career before Enterprise came into his life.

Serpents Among The Ruins is an outstanding book that feels like it belongs in the span of time it was slotted, between the frontiers of the Original Series to the more comfortable space in the Next Generation.  If the remaining Lost Era books are as strong as this one, it will be a very successful set of books, indeed.