Posted on April 24, 2013 by storytellersarchivist 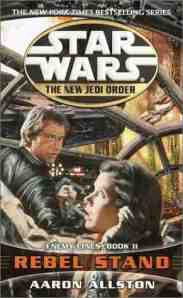 I’m not a politician anymore, Han.  I’m just pretending to be one.  I’ve come over to the scoundrel side of the Force.
-Princess Leia Organa Solo

When we last left off, Luke and Mara, along with one Jedi student, Tahiri, and the intelligence unit Wraith Squadron, landed on the captured world of Coruscant.  In the meantime, Wedge Antilles was keeping things interesting on Borleias for the Yuuzhan Vong by apparently creating a superweapon designed to blow up their worldships, while at the same time building up the image of Jaina Solo as the incarnation of their trickster goddess.  And Han and Leia were off attempting to keep worlds from supporting the Vong.

Rebel Stand covers all this territory, but the biggest thrust is on Luke’s group, as they explore the new reality of the former capitol of the Republic.  They quickly come to the conclusion that Coruscant as they knew it is gone forever, as they begin to see what the Vong are doing to the hi-tech world (not entirely surprising; given the Vong’s hatred of machines, one can understand how much they’d love to reshape this world).  However, there are a couple of details that must be attended to; survivors on Coruscant are being stalked by a being they call Lord Nyax, a being of childhood stories…and not nice stories; and a frequent thorn in the side of the Republic is here as well, and fares better than I really expected.

On another front, I have mixed feelings about the portions centering on Han and Leia.  I’m perfectly fine with their activities (and for the most part, they sideline the character of Tarc, who to be honest I never really liked).  Their banter, though seemed a little forced to me; I could see it just fine a few books ago, but given the recent tragedies that have slammed them, it doesn’t seem quite right to me.  On the other hand, I can’t deny that I liked the interplay between the two (there’s a lovely segment where they demonstrate that they aren’t impressed by the idea of being tortured, given that both were tortured by the quintessential Star Wars villain, a long time ago).

Jaina’s plot doesn’t get advanced all that much, which may be for the best for now.  Too many plots spoil the broth….  Even so, there’s time enough for a turning point, perhaps, with Kyp and Jag.  Wedge gets a chance to shine again in the latter portion of Rebel Stand as well, demonstrating his full strategy for Borleias (and demonstrating the most unique use of a Super Star Destroyer I’ve ever read about).  He also gets to deal with certain unexpected situations that don’t turn out as well as planned.

Rebel Stand also hits us with a concept we haven’t seen too much of in the New Jedi Order, and that’s the Dark Side of the Force.  We’ve really only seen the subtle temptations or the shades of gray that might stand between it and the Light, but it is once more demonstrated that a being in full possession of the Dark Side is an incredibly dangerous threat.  There’s also continuity referred to in here that I don’t recall reading about, unless it was something in the Young Jedi Knights books, which I’ve never read (or worse, the comic books).

The only flaw with this book (and by extension, the Enemy Lines duology) is that it doesn’t seem to really advance the main plot of the New Jedi Order.  Oh, there’s a couple things that will likely carry over, but it seems like it was just like the action on Borleias-a holding action.  On the other hand, it’s about as self contained a duology as we’ll get in the New Jedi Order, and that’s why I don’t really have any problems with these books.  If you’re money-short, you can probably skip these books without too much problem, but otherwise, I’d recommend reading them; if for no other reason, they’re fun to read, and that’s something that’s been lacking in the New Jedi Order for quite some time.

Posted on March 12, 2013 by storytellersarchivist 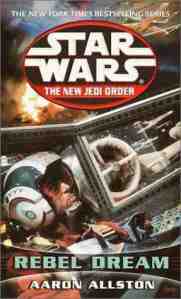 I have to say, this sounds like the worst idea in a thousand generations of bad ideas.
You haven’t heard all our ideas.
-Luke Skywalker, Jedi Master, and Bhindi Drayson, of Wraith Squadron

The Republic is reeling from its most devastating blow yet.  Coruscant has fallen, and our heroes are on the run.  An assault let by General Wedge Antilles allows Republic forces to set up a base in the nearby Pyria system, on the same planet that the fledgling New Republic once launched their own assault on Coruscant against the Empire.  The situation for the Republic is grim; a visit from a number of councilors demonstrates to Wedge and our main characters reinforces his belief that the surviving senators from Coruscant have already given up the Republic as lost, and are preparing to accept a Yuuzhan Vong victory.

Wedge, however, doesn’t accept that so easily.  He’s used to fighting impossible odds, as the former commander of Rogue Squadron-an elite squadron of X-Wings-and he’s quite prepared to do so again.  And the only way he can see to do it is to return to the earliest days of the Rebel Alliance, and operate separately-and secretly-from the Republic.  While he still answers to the Republic from a technical standpoint, he recognizes that everyone in the Pyria system have been left to die.  But it is also a strategic location to aid survivors and refugees from Coruscant, so he plans to hold on to it as long as possible.

The characters definitely start looking at things with a somewhat different point of view in Rebel Dream, the first part of the two part Enemy Lines arc.  I also had high expectations for this book, because of Aaron Allston.  Allston wrote the Wraith Squadron set of X-Wing novels (as well as Starfighters of Adumar), and all of those books were highly enjoyable.  So when I learned he would be writing a pair for the New Jedi Order, I was hoping for something equally enjoyable.

He does not disappoint.  The heroes start working proactively for a change; Han and Leia are out to start learning who to rely on in this new resistance; Jaina Solo makes use of the reputation that the Vong have given her, continuing psychological warfare against them with the aid of Jagged Fel and Kyp Durron.  Wedge organizes the defense of the world Borleias with the aid of his longtime comrade Tycho Celchu.  And Lando Calrissian prepares to insert a number of Jedi-including Luke and Mara Skywalker-secretly into Coruscant, with the aid of the Intelligence commandos of Wraith Squadron.

One of the hallmarks of Allston’s writing (at least in the Star Wars universe; haven’t read any of his other works) is the humorous side of Star Wars.  I wasn’t sure how I’d handle it, given the darker nature of the New Jedi Order series, but I found it to be a welcome return.  This isn’t to say the book is a laugh riot-it’s not-but it’s easy to forget that Han has a fairly sharp wit, and it was great to see some of the folks from the Wraith Squadron books again (laughing at danger in many ways is a hobby with them, I think).  The only part that gave me some problems was the glossing over of Jaina’s flirtation with the Dark Side of the Force.  I can overlook that, though, because he shows some great insights about why she’s having her emotional problems, and helps continue to develop the relationship between herself, Kyp, and Jagged.

Lest I forget, however…the Yuuzhan Vong don’t get shorted for time, either.  Viqi Shesh, who will undoubtedly go down in Republic history as its biggest traitor, manages to keep herself alive in the face of Warmaster Tsavong Lah-by exposing certain suspicions as to why his hand graft (well, claw anyway) has been giving him so much trouble.  The political picture gets a little more complicated as well, as he puts his father in command of a war fleet to crush Borleias.  And to keep matters even more interesting, there is a traitor put among the folks at Borleias as well….

Allston has done a nice job with Rebel Dream, managing a number of characters that could become unwieldy (a problem that this series is beginning to develop).  It likely helps that this is spread over two books, because there is a lot happening.  I’m looking forward to reading his next one soon.