Posted on March 15, 2015 by storytellersarchivist 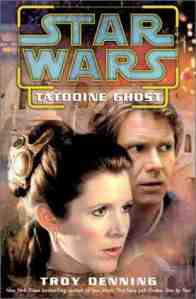 It doesn’t surprise me that you find this holo so fascinating.
Sure, I love little kids.  Especially human kids.
Of course.  But the boy in this ‘cube is no longer a child.  It was taken when he won the Boonta Eve Classic, more than forty years ago.
Won it?  Look, don’t think you’re talking to a pair of nerf herders, here.  Even when Podracing was legal, humans didn’t have the reflexes to survive it-much less win, and especially not as kids.
-Han Solo and Leia Organa-Solo, and a vendor with a holocube of a figure from the past

It is a time before the Vong; the Thrawn trilogy has yet to occur, but the heroes Han Solo and Princess Leia Organa have been married for months.  And the Empire is not the remnant it is now, but still a powerful force that threatens the New Republic.  Leia has not yet quite come to terms with the idea of Anakin Skywalker’s redemption; Han hasn’t come to terms with being jerked around by the Provisional Council of the New Republic while he was “courting” Leia.  But somewhere in this time frame, something happened.

This is where Tatooine Ghost opens.  Han and Leia are making a trip to Tatooine, hoping to bid on a moss painting from Alderaan called Killik Twilight, a painting that once hung in the palace on that world.  It also has a bit of a secret-for within the painting’s circuitry, there is a code key for the Rebel Alliance, which can’t be allowed to fall into Imperial hands.  Fortunately, the Empire doesn’t know it is there.  Unfortunately, they run into a Star Destroyer on the approach to Tatooine-the Chimaera, Captain Pellaeon’s ship-and it quickly becomes apparent that they have an interest in the painting.  (Why would this be?  Well, think time frame again; who would be interested in such a unique piece of art….?  It embarrasses me that I didn’t figure it out right away.)

While this would probably be enough for a decent story, it gets kicked up a notch when you find out that the painting is being sold in Mos Espa.  A brief encounter during the auction leads to a plot line in the book that runs alongside the main one-because once upon a time, Anakin Skywalker lived in Mos Espa, before Qui-Gon Jinn took him away to meet his destiny.  And this means we get the first real interactions between the Episode I-III eras with the Episode IV-VI eras (not counting Vergere from the New Jedi Order; you don’t get the same feeling of “EVENT” off of that as you do with Anakin’s home town).  Denning does a good job in bringing out old friends of Anakin, who knew him long before he became a Sith Lord-and who show Leia a bit of perspective that the evil Jedi who had tortured her wasn’t always a seething cauldron of hate and malice.  This plot line also fills in a very significant blank in the time between The Phantom Menace and Attack of the Clones-just whatever happened to Shmi Skywalker.

But don’t have the impression that it’s all about coming to terms with Vader’s past; there’s plenty enough going on in the main plot line; the auction itself-which not only goes about they way you’d expect, given the famous Solo luck, but also introduces a trio of Squibs, possibly the most avaricious creatures I’ve seen in the Star Wars setting (outside of Hutts and Toydarians, of course).  These guys are genuine weasels, but at least they stick to their contract…if you don’t mind tactics that tend to be a little more then you bargained for; and they’re about as persistent fellows that I’ve ever seen.  Throw in a group of Imperials who begin to actively hunt our Rebel pair, who show a distressing amount of competence that goes above simple brutality (again, if you followed the books, shouldn’t be all that surprising).

One of the threads going along in this book that I thought was a nice touch was Han and Leia’s attitude towards children.  Han wouldn’t mind having some-we get hints of an interest in being a family man in this book, which makes a great deal of sense considering his background.  Leia’s attitude also matches her background-her family has always been strong in the Force, and her father was the nastiest piece of work the galaxy had ever seen (except for the Emperor, of course); it’s not surprising that she feels hesitant about having children, for fear of what they could become.

I rather enjoyed this book; after all, it’s set at a good time for the setting-the Empire is still out there, the New Republic is still working on inventing itself, no hint of the really ugly events of the New Jedi Order on the horizon-and hey, it’s got Chewbacca!  It’s been too long….  Even so, though, I’ll admit my favorite portions of the book were the ones tying into the Old Republic era.  It was good to see what became of a number of characters on Tatooine that we’d seen in Episodes I and II, and it was better to see Leia discover these things (the Force is a wonderful prompter) and learn a little more about her father in times less dark.  It also kinda makes me hope we see a similar treatment whenever they finish making Episode III, because the novels are a great place to explore the “final” fates of a number of characters.

All in all, I think Tatooine Ghost was a good read, especially considering the nice continuity ties to both the events in the first two episodes and to the events that would soon take place (probably shortly after the events of this novel!).  It’s definitely worth a read for any Star Wars fan.